Architectural design: Stairs over the door One of the top pinned images for the month of January was this beautiful entry, designed by J. Randall Powers.  The comment on the pin was ‘so thoughtfully designed’ – and given the number of pins this image received, clearly many agreed. The composition of the space is beautiful, and every piece selected for this space is just right. But something else that caught my eye was the interesting architecture of the space – how the stairs are placed to the left of the front door and wrap around over the door.  There is no picture of the front exterior of the house, so it is not easy to understand how the entry relates to the floor plan (and if this is even the front of the house – it might not be given that there are no windows above the stairs), but I like how the stair placement creates a two story entry that has nice proportions, and this is probably a very efficient place for the stairs in the house. To see the rest of the house, see the AD article here. I came across this image from Luxe, not long after seeing the J. Randall Powers image, and I initially thought they were one and the same. Of course, I realized quickly that they were not, but this architecture has the same idea – the stairs are located to the left of the door, tucked to the side, and wrap over the front door.  There are windows over the stairs as this is clearly on the front of the house. This image was part of a thematic post on luxesource.com on entries, so I don’t know what the exterior of this house looks like. 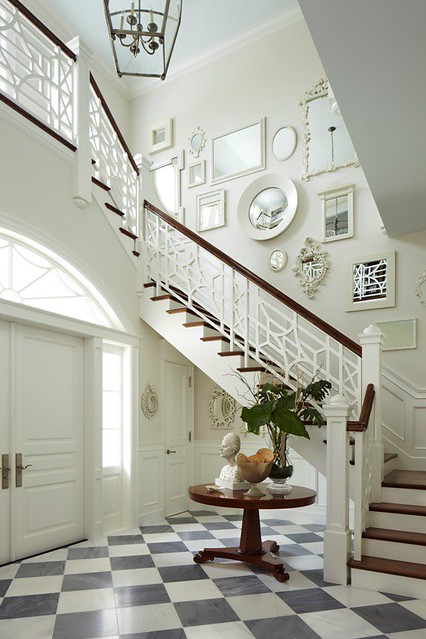 This wonderful entry of a Palm Beach house, with interior design by Jack Fhilips, is a magnificent example of a staircase over a front door. I like how the placement of the stairs creates a niche for the center hall table and a small closet.

Given that this architectural feature intrigued me, I started thinking about the houses I have seen with this feature. 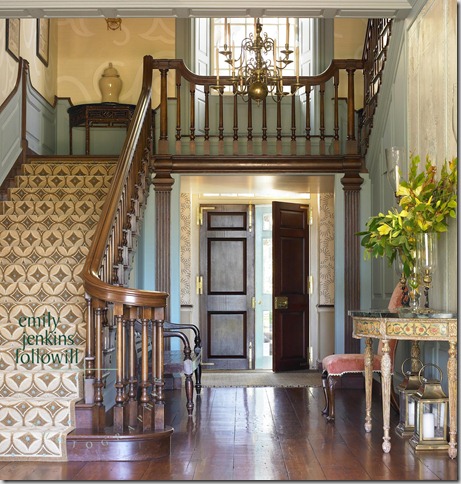 One of the first houses that came to mind was on the Cathedral Tour of Homes 2011 (I wrote about the homes in a post here). It was designed by James Means in the Virginia Tidewater style of the mid-18th century, and was strongly influenced the design of the James River Plantation Carter’s Grove (c. 1755).  The entry goes from front to back, and the stairs wrap over the front door. 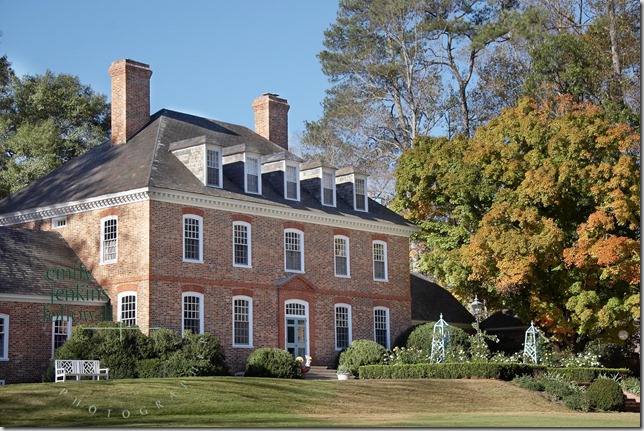 Here is a picture of the exterior of the house. The window above the front door is actually on the stairs. Photos by Emily Followill. 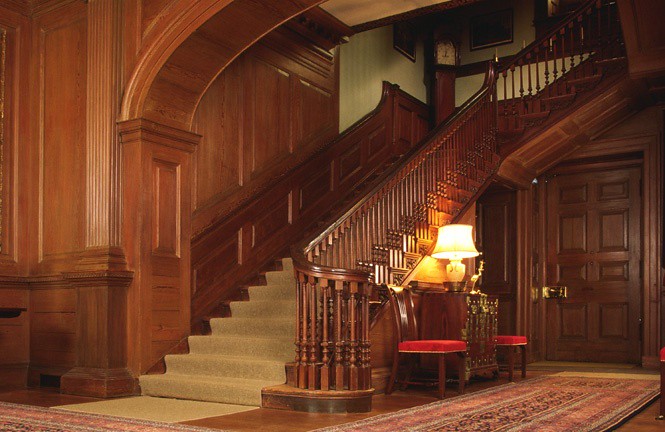 Here is a picture of the entry hall of Carter’s Grove, which has a similar stair location and design (clearly the spindles in the James Means house were inspired by the original). A house on the 2012 Cathedral Tour of Homes was this beautiful house built in the 1930s (post about houses here).  Upon entering the home, the unusual and striking design and placement of the stairs is a defining feature of the entry. Here is what the house looks like on the exterior. The window above the door is on the second floor. Photo credit: Emily Followill. 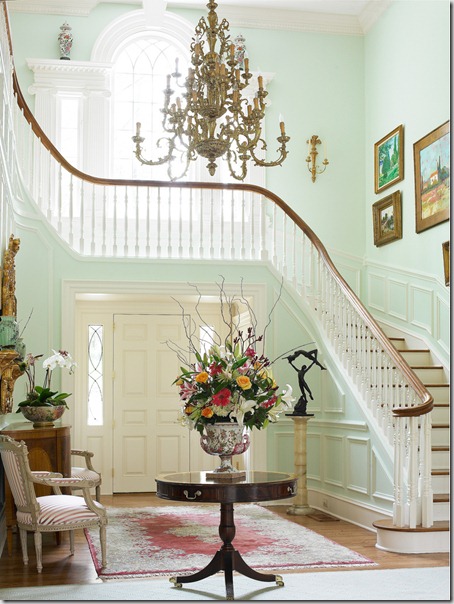 Yet another home on one of the Cathedral Tour of Homes came to mind, this one on the 2010 tour (see houses here). The house was built in the 1990s, and is a classically proportioned Georgian design, inspired by the John Brown House of Providence, Rhode Island (1786).  The grand staircase is a defining feature of the entry, and wraps around over the front door. 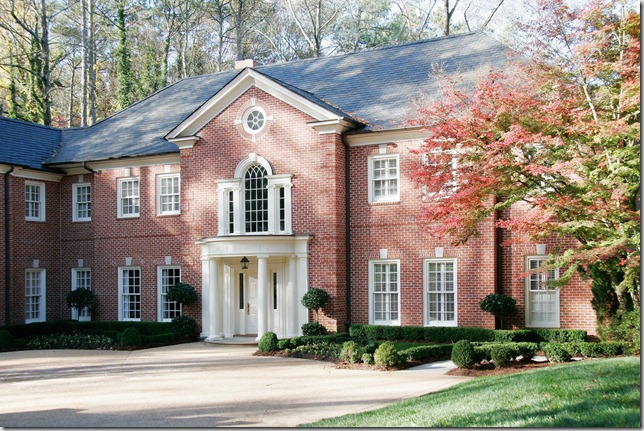 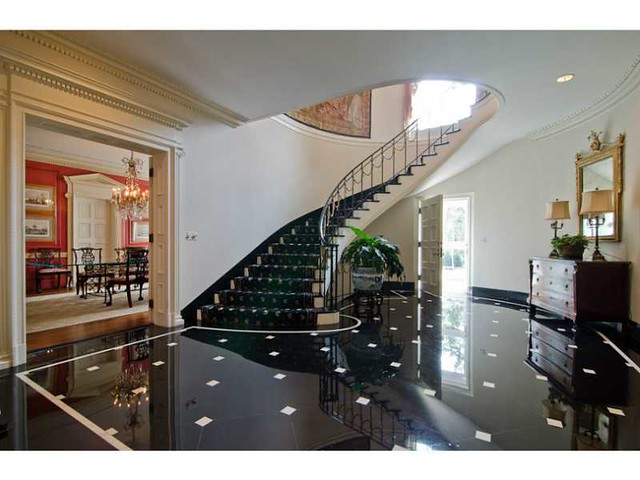 A classic 1930s Atlanta estate that is on the market also has a stair positioned over a door (although I am not certain whether it is the front or back door). “Windcrofte”, was the home of former Coca-Cola chairman Robert Woodruff. 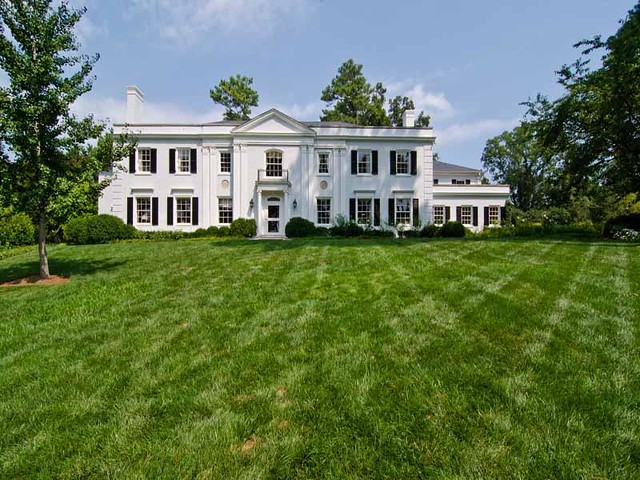 Here is the exterior of Windcrofte. Like one of the previous houses, the front door and window above (which is on the stairwell) create their own defined area of the front elevation of the house (this is where knowing the specific architectural terms would help!). The real estate listing has more interior pictures. 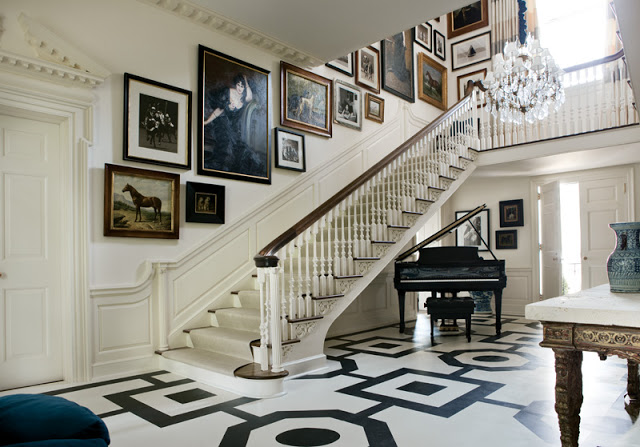 The Atlanta Symphony Showhouse in 2012 was particularly memorable as it was in a Philip Shutze designed house from the 1920s.  Note that the stairs wrap over the door.  This entry hall has a door on both sides of the hall.

This picture is from the ASO Show House in 2012, and the space was designed by Melanie Turner Interiors.  She had a flooring placed on top of the original floor so she could paint it – when the show house was over, the painted floor was simply removed. 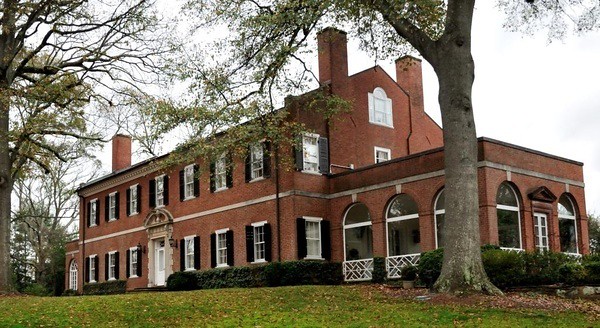 Here is the south façade of the house – the side that faces West Paces Ferry.  The original property went all the way to West Paces Ferry, but the land has been sold through the years.  Although this could technically be considered the ‘front’ of the house, I doubt it was ever used as a main entry, but more as the beautiful façade facing the main road. 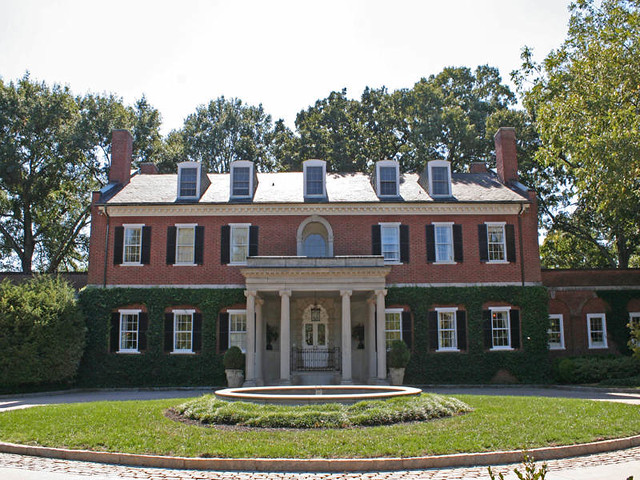 Here is a good picture of the north façade.  This is the side that was used as the entrance for the showhouse, and I feel pretty certain that the stairs wrap over the door on this side (if anyone can confirm this, please leave a comment). 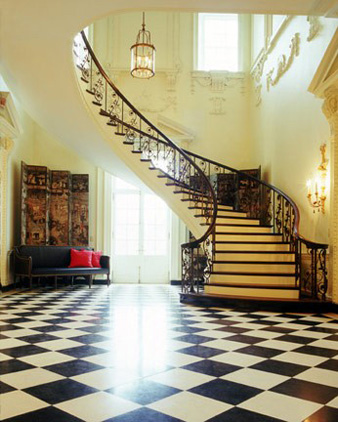 Another one of Atlanta’s famed architectural treasures is the Swan House, designed by Philip Shutze and built in 1928 as an ‘empty nester’ house for the Edward Inman family.  The entry is a beautiful space, with a floating staircase curved over the door.  I am not certain if this door is the official front door – it is the more special façade of the house that faces West Andrews, and is very impressive. But was it ever used as a front door?   Photo credit Atlanta History Center/Swan House. 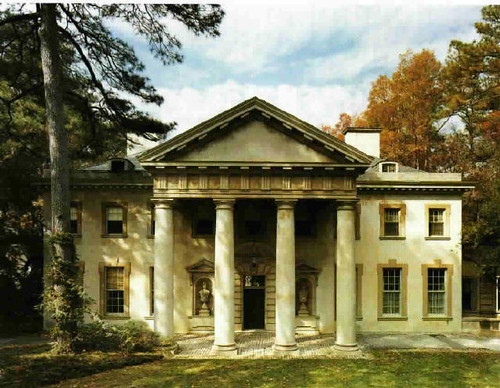 The east elevation, through which all visitors enter now (and I feel pretty certain this has always been the main entrance), is quite beautiful. 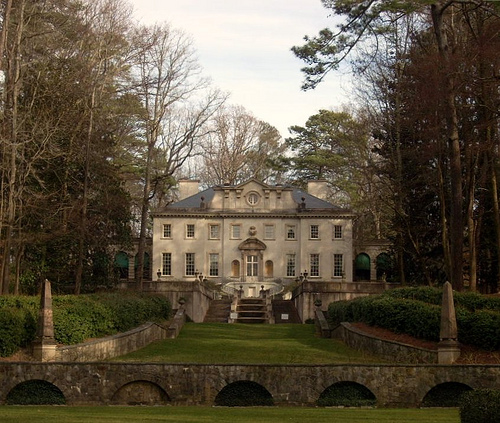 I think about this classic view of the Swan House as the ‘front’ of the house.  The door seen here is the one seen in the image of the entry – the stairs curve and float above this door in the entry hall. 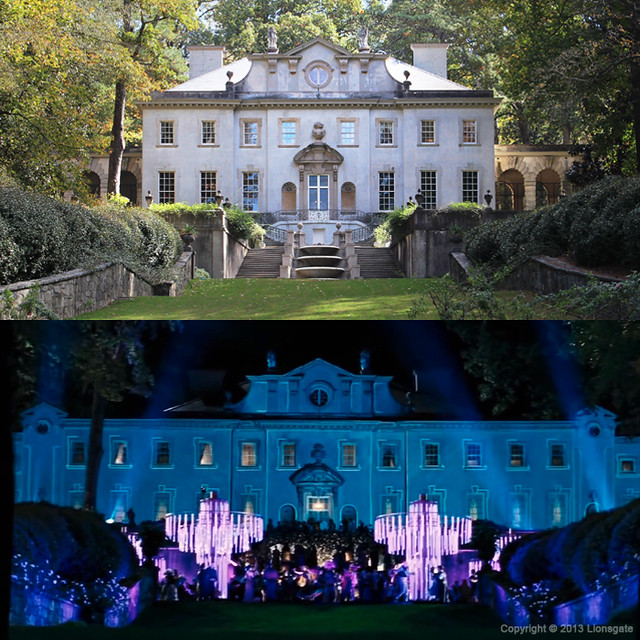 I couldn’t resist including this image that I found while researching this post – the Swan House was used for both interior and exterior scenes of The Hunger Games: Catching Fire – it is President Snow’s house.  There are quite a few Hunger Game tours in Atlanta now, including one at the Swan House.  Image source.

So back to the topic of this post – what do you think of stairs that wrap around and over the front door? Do you see this architectural feature in your area?  If there are any architects or designers out there who can shed light on why this was a feature of certain homes from the 1920s and 1930s, I would be interested to hear about it. I speculate it was due to the face that many of the ‘front’ elevations were not truly used as entries, and designing the stairs in this manner created a dramatic and beautiful view for the door that was primarily used to enter the house. I would love to know! 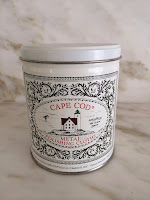 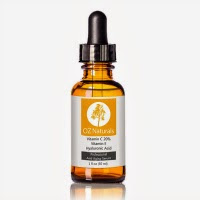 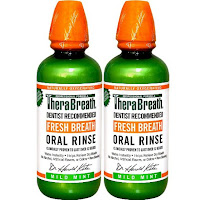 Thank you for your comments! I strive to make my blog positive in tone, and appreciate the same courtesy when comments are made. Thank you!